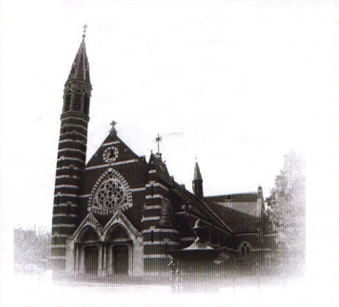 Albert Purchas was the architect that designed St George's church and Sir James McCulloch KCMG had the privilege to lay the foundation stone of St George's on 21 April 1877. The first service was held on 1 October 1877.  The church soon became too small to hold the large congregation and steps were taken for the church's enlargement.  On 7 May 1880, Sir James McCulloch laid the enlargement Memorial Stone and the building opened for Worship on Sunday 3 October 1880. In 1882 the St George's TC Lewis pipe organ arrived from London and became an intergral part of St George's Church.  At that time St George's was a Presbyterian church.  It was not until 1977 that the Uniting Church was formed.

The Ministers of St. George's

During the first 115 years of St George's existence, the church was served by thirteen ministers whose terms lasted from as little as 3 years to as long as 20 years.

The background of the ministers varied, with the Revd Dr John Rentoul and the Revd Thomas Glass coming from England an Northern Ireland, while Revd Andrew Gillison and the Revd Samuel McKenzie were called from interstate. The high level of academic qualifications is also notable - six out of the first eight serving Ministers at St George's earned a Masters degree.   Many of these ministers left St George's to take up positions of higher office.

Wartime also effected the stays of the ministers of St George's.   Revd Glass and Revd McKenzie served during the two World Wars.   Revd Andrew Gillison died on the battlefields of Gallipoli while attempting to rescue a wounded soldier.  An annual service now takes place in memory of his death.

The memories of the ministers still exist at St George's.  A variety of memorials in the church recognize the roles played by these men.  A memorial tablet on the western wall of the south transept remembers the second minister, the Revd John Mackie, while Revd Gillison's service and sacrifice are recognized in the Communion table and a memorial tablet on the northern wall of the north transept.  Revd McKenzie is remembered in a stained glass window on the southern side of the church while the service of the Revd James Mills is recognized in the plaque on the left of the pulpit.